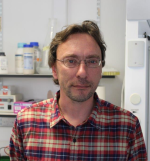 Dr Ronan Sulpice is a Lecturer in the School of Natural Sciences at NUI Galway (Ireland) since 2012. He obtained his PhD from the University of Rennes (France) in 2000. This was followed by Researcher positions at the National Institute for Basic Biology (NIBB, Japan), the Technical University of Munich (TUM) and the Max Planck Institute of Molecular Plant Physiology (MPIMP, Germany). Dr Sulpice interests focus at elucidating in photosynthetic organisms the cross talk between primary metabolism and growth, with special emphasis at how the environment modulate them.

Antoine originally worked on plant improvement in the model species Arabidopsis thaliana, by using whole genome duplications and their associated growth, genetic and epigenetic responses. In Sulpice’s lab, Antoine specialises in green and brown algae growth monitoring and performance assessment, through the use of custom-made phenotyping platforms. Antoine aims to characterise the effect(s) of the genetic diversity of green and brown algae on growth and metabolism.

Charlène graduated in BSc Applied Biology at the Aeres University of Almere (The Netherlands), during which she learnt about plant biotechnology and seaweed

cultivation at Wageningen University. After her BSc, she made a Pre-Master in biology at Rijksuniversiteit Groningen (RUG, the Netherlands). During her internships at NIOZ Texel and the Ryan Institute at NUI Galway, she obtained skills in seaweed identification and seaweed cultivation.  In Sulpice lab she is studying the ecological effects of Ascophyllum nodosum harvesting to develop recommendations for best seaweed harvest practices.

Regulation of barley growth in response to environmental factors

Kallyne holds a CNPq fellowship, Science Without Borders programme from Brazil. She graduated in Biological Sciences at the Federal University of Viçosa (UFV), Minas Gerais, Brazil; where she also got MSc. in Plant Physiology. She worked on plant anatomy, alternative mitochondrial metabolism, and the role of organic acids in stomatal movements. In Sulpice lab, she is working on the primary metabolism of barley plants grown under different stresses.

Lecturer at the GMIT, Galway, Ireland since september 2019

Dr Jose M. Fariñas-Franco is a marine benthic ecologist, taxonomist and scientific diver with more than 15 years’ experience working in industry and academia. His main research interests are the biodiversity of marine benthic communities, especially the role of keystone species and the conservation and ecological restoration of marine habitats. As a postdoctoral researcher within the GENIALG project, Jose is studying the effects of cultivated algae (e.g. the sugar kelp Saccharina latissima) and associated growing structures in coastal ecosystems, focusing on their interaction with local biodiversity and faunal community assemblages. Jose is also an adjunct lecturer in Zoology at the Ryan Institute, NUI Galway.

Growth and metabolism in cyanobacteria

Alberto graduated in Biological Sciences at the Federal University of Viçosa (UFV), Minas Gerais, Brazil; where he also got his MSc. in Plant Physiology. Currently, he holds a CAPES/Science Without Borders PhD fellowship and works on the ecophysiology and metabolism of cyanobacteria, seeking to identify the growth limiting factors of these microorganisms and improve their production of biomass and bioproducts. Alberto obtained his Ph.D in February 2018.

2019/09/16: insight paper on the potential importance of metabolomics for breeding against the yield gap published in J. Exp Bot. paper here

2019/09/06: Our paper on the impact of green tides on Ulva strains is now published in Science of the Total Environment.

2019/02/12: Our paper on growth and metabolic differences between sea lettuce strains is now published in Plant Physiology.

2018/05/01: Antoine’s Paper published in Algal Research describing the use of Magnetic beads for efficient DNA extraction from macroalgae.

2018/04/12: Alberto’s review on Nitrogen metabolism in Cyanobacteria published in Critical Review in Microbiology.